At the end of this month, David and Jennifer Wright and their boys, Ben and Cole, return to Niamey, Niger for a four-year term. This will be the third time they’ve returned… home. (There is a point in a missionary’s life where it gets confusing. What’s home and what’s abroad? )

And it isn’t easy to make a home in a country that is so different than your own. Dan Sheffield, Global Ministries Director, confirmed Niger as a Gateway Cities Project in one of the most unreached parts of the world, with 97% of the population being Muslim. Niger is on the edge of the Sahara with temperatures that make our summer heat waves look refreshing. There is a language barrier, a totally different way of dressing, eating, interacting with others, and day-to-day living. But David and Jennifer are motivated by something greater than ease or comfort; they are motivated by the call to serve God in Niger.

Jennifer talks about their respective desires to serve God in Africa:

I felt called as a child to missions to Africa when I went on a trip with my family. Dave felt a call when he was in Bible College. The call to Niger came as a result of some work that I did on the Gateways Cities Prayer Guide (that got me praying again for the 10/40 window) and an exploratory trip by Dan [Sheffield]. Dave discovered that they were starting a new Bible school and was interested in teaching. When we found out that they had a school for missionary kids that our boys could go to and I could teach at it felt like a good fit but it was the way that God provided the support that we needed that really made it clear that this is what we should be doing. 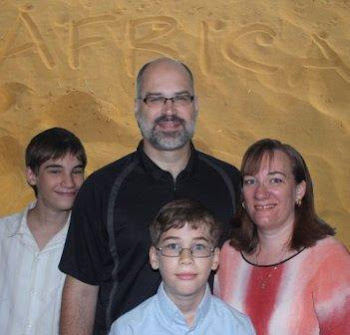 David and Jennifer first went to Niger in 2004 and have lived there six years in total. Their efforts in Niger have been concentrated on starting a Free Methodist church on the outskirts of Niamey, the capital of Niger. Dave Wright has discipled a pastor who has planted a church in Niamey, which is fully functioning as a Free Methodist Church.

While the functionality of it is right in line with making the Free Methodist mission visible in this Muslim community, the design of it is also inspiring. Dan Sheffield explains,

The Ministry Centre would be as an oasis in city on the edge of the desert. If we are to fit into the social context there, then even the design ideas are intended to fit in with existing architecture and indigenous methods. Part of the vision is to plant trees and wading pool, cooling pond, so that when people come in and sit in the courtyard, instead of sitting on benches, there will be vines and shade. When you walk through that community, it’s all concrete and walls and sand, so the idea is that even what we do with the Ministry Centre is testimony to God’s restoration, on the edge of the desert. This investment is bringing renewal in this neighbourhood.

In addition to carrying out the vision for the Ministry Centre, David and Jennifer return with the intention of seeing a number of churches coming to life while they are there.   The foundation has been laid as they have built good relationships and a connection in a particular community.

It is challenging to bring a Free Methodist DNA to churches that are in existence [in Niger] and the ones that will be planted. Yet we know that we are the biggest asset and problem to that our involvement can be as big a hindrance as it can be a blessing because people can look at us and say we’re just Canadian and Christianity is a Canadian thing. We want to avoid that and want to church plant in a different way than we would in Canada. In Canada, you a lead church, in Niger, you plant a church so that someone else can lead it.

Dave will be working on mentoring pastors and discovering mature Christian Nigerien leaders who can take on the challenge.

Jen admits, “There have been many times when we were ready to quit or go home but always in our hearts we knew that God was at work despite what we felt, and that He is faithful to sustain us.”

How you can help

We have the opportunity to support the work of Dave & Jennifer Wright on behalf of the Free Methodist Church in Canada.

First and foremost is prayer support as they return, that they would maintain and build on their connections. Also, on a practical level, they need to find a new place to live and get the boys re-settled into school and friendships. Follow along with their blog to keep up-to-date on news, events and prayer requests throughout their time in Niger.

Global Ministries Director, Dan Sheffield, will be visiting the Wrights in Niger in November, along with Pastor Jay Mowchenko, of Weyburn Free Methodist Church, and his family. The invitation is open to anyone who is interested in travelling with them to explore, learn and pray for this project!

On Sunday, July 22, at 4 p.m., there will be a prayer and send-off gathering for the Wrights hosted at Freedom Christian Community Church in Brantford, Ontario.  Please feel free to join us for this special time of encouragement, worship and prayer for the Wrights.