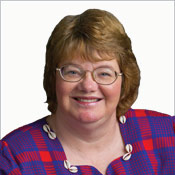 Upon her return to Kenya in early 2006, Debbie will be settling into a new ministry assignment in the city of Eldoret, Kenya to work alongside a Kenyan church planter. She will continue her work in Christian education leadership and development in the Kenya Annual Conference, along with youth ministry and teaching at the FMC pastors’ bible college program.

Debbie came to Kenya from Burundi where she taught at Mweya Bible Institute. She was evacuated from Burundi in April 1994 due to increasing political unrest. Before that she had served in Zaire but was forced to leave there in September 1991 because of similar political disturbance. She had returned to Zaire as a career missionary in 1988 after having spent two years there, 1984 to 1986, under the VISA (Volunteers In Service Abroad) program. Assigned to the Mshimbakye Bible Institute in eastern Zaire, Debbie was involved in pastoral training. In additional to teaching, she also served as the assistant director of the Christian Education Commission for the Zaire Provisional General Conference of over 55,000 members and worked with leaders on conference, district and local levels. Most recently she just completed a decade of involvement at Kenya Highlands Bible College, an interdenominational school in Kericho, where she was also vitally engaged with a Free Methodist church development project.

Debbie was graduated from Spring Arbor College in Michigan and Asbury Theological Seminary in Wilmore, Kentucky.