The following is the story of Sergio told in three acts and written by Doug Dawson (Open Arms FMC in Tillsonberg, ON) and Barb Peterson (Iglesia del Buen Samaritano in Sarnia, ON.)

The story begins in Tillsonburg, ON in 2006.  Lloyd Peterson (New Horizons FMC in Sarnia, ON) first met Sergio while walking the streets in Tillsonburg on a Friday afternoon and he invited Sergio to Brazos Abiertos – an outreach centre for Spanish speaking migrant workers – a ministry of Open Arms FMC. At Brazos Abiertos, Sergio met Barb Peterson, Pastor of Iglesia del Buen Samaritano in Sarnia, ON, and the two talked about his home area of Durango, Mexico.  While his visit was brief it was clear from Sergio’s sad face that he was lonely.  Sergio left the outreach centre with a new Spanish language Bible and half an hour later Doug Dawson, Pastor of Open Arms FMC, saw him sitting on a bench reading his new Bible.

Sergio continued to read his Bible throughout the week and the following Friday he returned to Brazos Abiertos to talk.  He asked deep theological questions that Barb wasn’t sure she could answer well in English let alone in Spanish.  She suggested he move from reading the Old Testament to the New Testament – specifically the Gospel of John which he did.  That third Friday Lloyd met Sergio in the streets of Tillsonburg again and he returned to the centre saying, “If I understand Sergio, he is ready to accept Christ.”

Sergio and Barb talked then prayed and he was converted through the grace of God which had been working in him over the past three weeks. That night Sergio’s sad face was transformed by the huge, beautiful smile on his face.  Each week, Sergio returned to the centre and he began attending a Spanish church service in Tillsonburg. 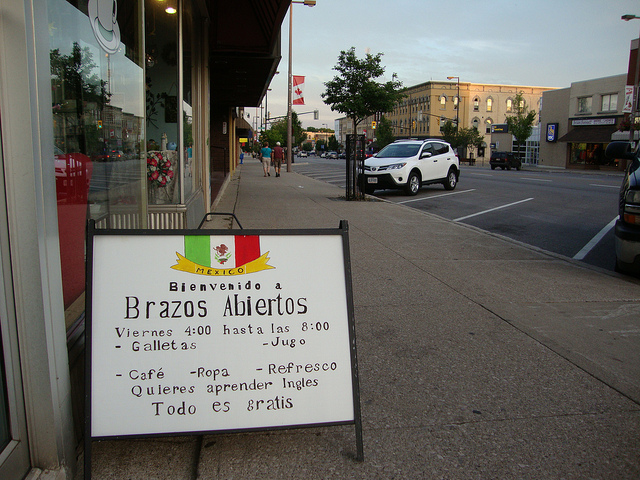 That fall when Sergio came to Brazos Abiertos to say goodbye because he was returning to Mexico, Barb gave him the contact information of Victor Gurrola, a strong evangelical Christian living in Durango, Mexico.  When he returned to Mexico the first thing Sergio did was go to the bank where Victor worked.  Victor had been transferred to another office so Sergio was given directions to that office.  Victor was late leaving for lunch that day and was in the office when Sergio finally found him.  Sergio said to him, “You don’t know me but I was told to find you.”

God had worked out all the details that day.  Not only did Sergio find Victor but guess who was picking Victor up for lunch that day?  Lloyd Peterson!  Lloyd and Barb spend a few weeks each winter in Mexico to follow up with the migrant workers they meet in the summer.

The three men went to Victor’s home for lunch.  That evening Lloyd and Barb took Sergio to an evangelical church in his sector of Durango.  Two days later, they met Sergio’s wife and two children. His wife could see changes in Sergio and was willing to listen as Lloyd and Barb asked her to hear his story.  What happened to Sergio is the goal of Tillsonburg’s Open Arms and Sarnia’s New Horizons mission work: to connect new converts (people who accept Christ while in Canada) with churches and pastors in Mexico. As one pastor taught us to say, “Dios es bueno (God is good)” and his congregation responds, “Todo el tiempo (All the time).” 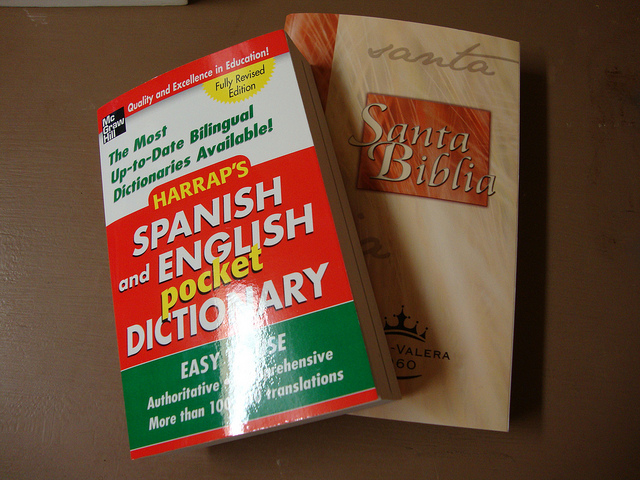 The farm where Sergio worked in Courtland, ON closed and Sergio spent the next few years working in British Columbia. Doug, Lloyd and Barb often thought about Sergio and wondered how he was but contact had been lost.

Fast forward to Sunday, March 30, 2014 and some Mexican migrant workers who attend Iglesia del Buen Samaritano in Sarnia, ON and migrant workers from a farm near Warwick, ON meet in a home in Forest, ON for fellowship, food and study.  A man sits down across from Barb and after a few minutes he says, “I remember you.  I’m Sergio from Tillsonburg.”

Barb realized it was indeed an older version of Sergio.  He had returned to Southwestern Ontario in January.   They got caught up and Sergio spoke about his wife and not two but now three children.  He continues to attend church in Durango when in Mexico. And as the evening went on it was wonderful to hear Sergio share and quote scripture from memory.

How awesome to know that Sergio has become a mature Christian and so thankful for this amazing reunion.  What an awesome God who works in wonderful ways!